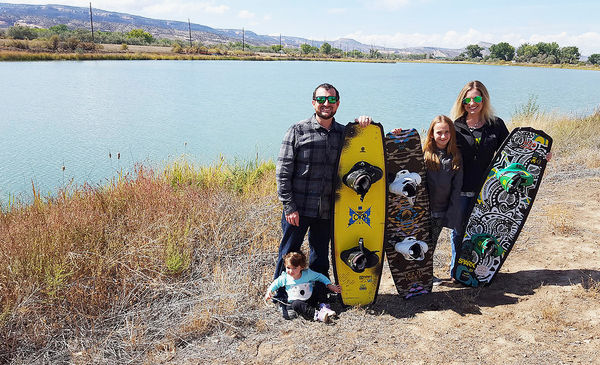 October 4, 2017 – We’ve gotten accustomed to referencing the Grand Valley as the Outdoor Capital of Colorado around here, and here’s yet another reason why the moniker is so apt. Last night, Fruita City Council approved a lease agreement to operate a wakeboarding park adjacent to the Greenway Industrial Park in Fruita. It’ll be one of only a handful of such parks across the country. Here’s more from The Daily Sentinel:

“The Fruita City Council on Tuesday night unanimously approved a lease arrangement for a Fruita couple to operate a cable wakeboarding park on a city-owned lake near Interstate 70.

Kodi and Victor Imondi expect to open Imondi Wake Zone by next spring, the state’s first-ever cable wakeboarding park at a 30-acre lake near Fruita’s Greenway Industrial Park off 16 Road.

‘It allows people to enjoy water sports without the need for a boat,’ Victor Imondi told councilors at the meeting.

A cable system can pull up to seven wakeboarders in a counterclockwise circuit on the lake, offering the opportunity to jump over obstacles and ride rails. Another option gives beginner wakeboarders a chance to try out the sport on a shorter course that cuts across another portion of the lake. A 7-acre section of the lake on the western side will be open to the public for swimming, stand-up paddleboarding and kayaking.

‘This is really going to bridge the gap in the summer, in those 100-degree days,’ Kodi Imondi said. ‘It gives people another reason to come to Fruita.’

The Imondis have been eyeing the lake as a site for their business for years, and the partnership with Fruita helped make their business plan work. Mesa Grand, the company that owns the Greenway Industrial Park, deeded the lake to Fruita last year with the intention that Fruita use it for recreation purposes.

Fruita City Manager Mike Bennett said on Tuesday night that Fruita currently doesn’t have funds to develop the lake as a park. The partnership with the Imondis allows public use of the lake and may act as a way to attract more tenants to the industrial park.

‘It fits right in with the outdoor activities we cherish in our community,’ Bennett said.

The Imondis also have secured a lease on a parcel to the north, inside the industrial park. They plan to build a pro shop for supplies and rentals. It also will include restrooms for customers and also for the public using the new section of the Kokopelli section of the Colorado Riverfront Trail. The trail is under construction on the south side of the lake.

The Imondis estimate they’ll sink nearly $1 million into the project, and it’s estimated to provide 15 jobs.

Future plans for the lake may include adding inflatable water park features, a sand volleyball facility and a stage for live music, the couple said.

‘The possibilities are amazing,’ Fruita Mayor Lori Buck said after voting to extend the lease. ‘This is really going to change the face of that business park.'”

Read the full article in The Daily Sentinel here.

LEARN MORE ABOUT THE GREENWAY INDUSTRIAL PARK IN FRUITA, COLORADO.