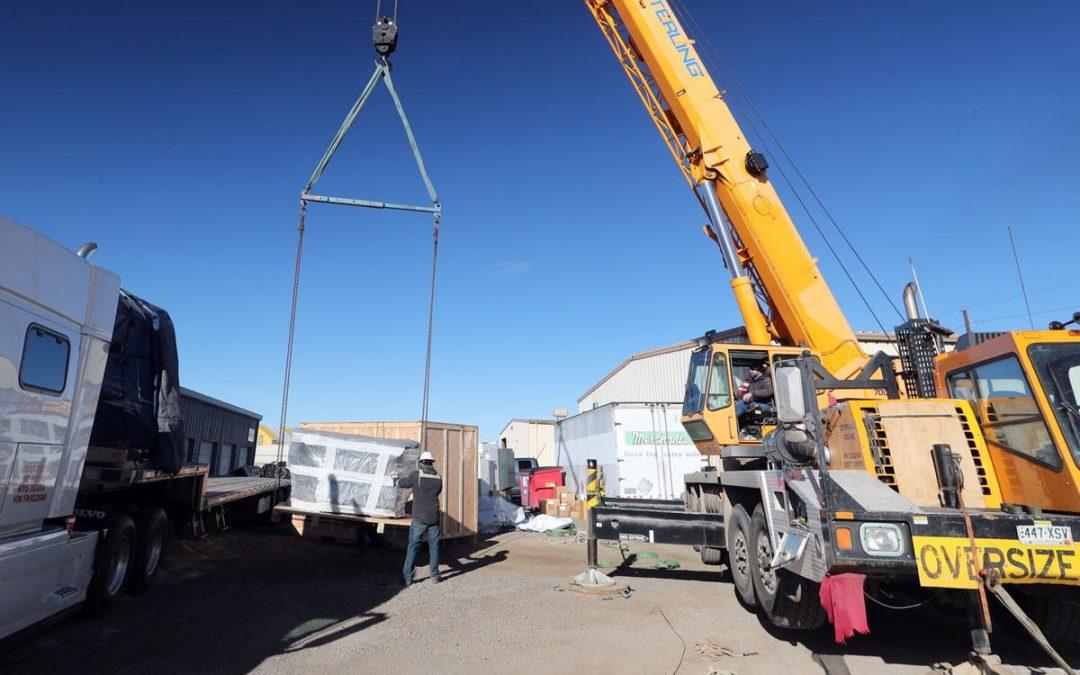 After a successful fundraising round, bike rack manufacturer QuikRStuff installed new CNC machines at its Grand Junction factory, allowing the startup to officially kick off its much-awaited next product run. Read more from The Daily Sentinel below – or watch the highlights via KKCO 11 News here.

“On Friday, a towering orange crane sat in a narrow alley at a factory at 2477 Riverside Parkway. It was moving packages of machinery for bike manufacturer QuikRStuff.

The Grand Junction startup is moving forward with its latest batch of bike racks. The company produced 100 models of the QuikRack Mach2, designed by Cal Phillips, and it sold out quickly.

The machine parts within those new packages are going to help produce 1,000 more such racks. Bryan Wachs, who founded QuikRStuff with JT Westcott, said this will help their goal of being a key player in diversifying Grand Junction’s economy and building a future for young entrepreneurs.

‘The exciting thing for me is that these machines will make us a viable American manufacturer and so that we can compete with others,’ Wachs said. ‘We also wanted to make sure that we’ll be creating jobs here on the Western Slope.’

To help fund those aspirations, QuikRStuff has looked for outside help. On top of $245,000 in presales, it received $100,000 from the Greater Colorado Venture Fund. QuikRStuff also received a grant from the Colorado Office of Economic Development and International Trade in October.

Since moving to Grand Junction in 2015, Wachs has worked closely with Maverick Innovation Center at CMU as the entrepreneur in residence. QuikRStuff has received help from mostly engineering students, who helped design a portion of the new rack. Wachs also looked for student help in other areas…

Wachs is confident in Mach 2’s durability, and now will be able to meet a growing need for the product. Many people are moving to the Grand Valley because of the COVID-19 pandemic.

‘We’re in a really great place for outdoor recreation. I mean, where else can you go mountain biking and then head to the golf course or river in one day,’ Wachs said. ‘In the mountain bike world, this is known by the pros. They tell us that we don’t know just how good the local riders are here.’