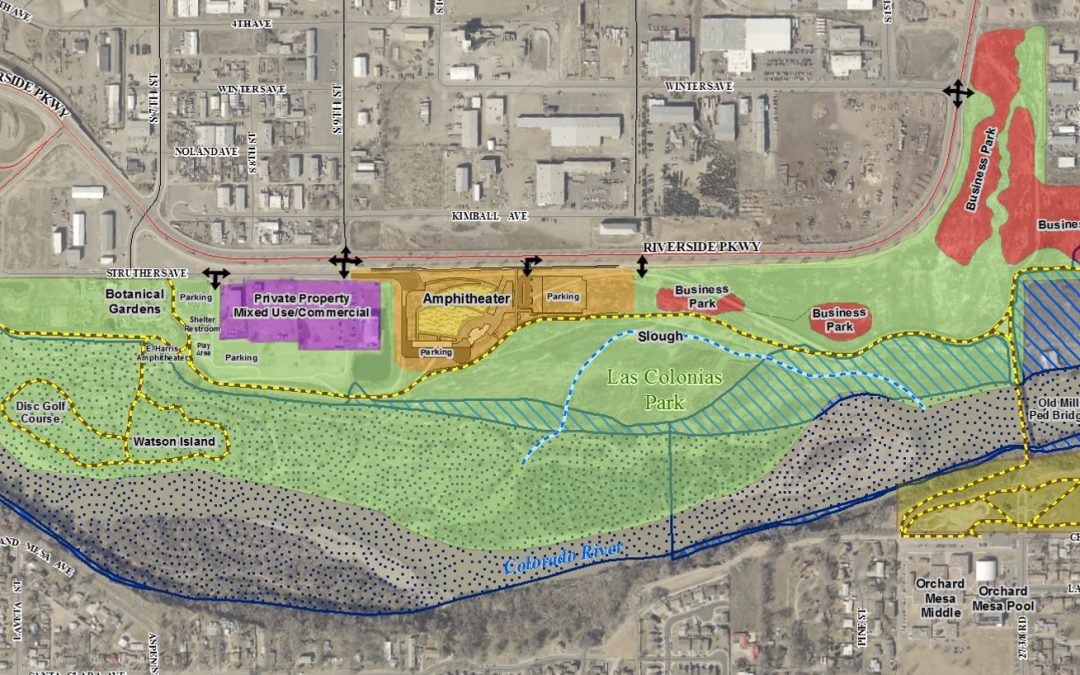 FOR IMMEDIATE RELEASE (March 31, 2017 | Grand Junction, CO) – Wednesday evening, during a special City Council meeting, the Grand Junction City Council authorized the City Manager to negotiate a proposal to retain Bonsai Design, a local business that designs and builds aerial adventure courses around the U.S., in Grand Junction. This signals a first, but significant step toward creating a $30 million business park and recreational development in Las Colonias Park – and a concerted effort by multiple public and private partners to brand Grand Junction as the number one destination for outdoor recreation businesses in the country.

“The prospect of this business park and public outdoor amenity combining in the lower portion of downtown is simply unlike anything we have seen here before, and frankly unlike anything in Colorado. This is an unbelievable opportunity for Grand Junction, and something we believe may not only further entice businesses looking to move to our area, but also provide new opportunities for those already here who may have skill sets from other industries. Not only are we retaining a renowned up-and-coming business in Bonsai, but also this project brings the potential to transform this section of town and play a significant role in bolstering a struggling economy,” said Grand Junction Mayor Phyllis Norris.

The proposal, which was approved by a 6 to 1 vote (Councilmember McArthur dissented), authorizes the City Manager to negotiate the lease of 4 to 4.5 acres on the east end of Las Colonias Park to Bonsai Design for $20,000 per year over 25 years. The City further agrees to contribute $1 million toward the construction of the new facilities and will waive certain fees, as well as real and business personal property taxes over a 10-year period, totaling approximately $117,000. The State of Colorado has already agreed to provide the company $75,000 in cash incentives to support new job creation.

In return, Bonsai Design will add 15 new employees at the new facility, totaling 50 employees with an average salary of $55,000. The expected economic impact from Bonsai Design alone is over $20 million on the community.

Bonsai Design will also serve as the anchor tenant of the proposed new business and recreational park on the east end of Las Colonias Park, which is projected to have $10 million of public investment and $20 million of private sector investment into its development. The business park will host 10-15 acres of sites available for businesses in the outdoor recreation industry, including light manufacturing.

The business sites will be surrounded by amenities open to the public, such as a lake for water sports, a dog park, volleyball courts and minor retail/commercial operations.

Bonsai Design plans to invest $2 million into new facilities including a $600,000 R&D facility on the new site, which will include zip line and challenge courses open to the public. Other business tenants are expected to follow suit with similar improvements.

“We couldn’t be more excited to expand and grow our business on the riverfront right here in Mesa County,” said Thaddeus Shrader, CEO and Owner, Bonsai Design. “Instead of taking the bait and moving to another community where this work environment is already established; [co-owner] Sarah [Shrader] and I decided it was worth it to dig in and create a next generation live-work-play opportunity for our employees and other businesses considering a move to the Grand Valley.”

Bonsai Design started in Grand Junction in 2004 with two employees. In 2012, the company moved out of the Shraders’ home and into the Union Station building at 201 South Avenue in downtown Grand Junction. Revolution Investments recently purchased that building with plans to develop a boutique hotel, leading Bonsai Design to seek new grounds. The company was actively being recruited by other communities, most prominently Carbondale, CO and Ogden, UT, when the Shraders began collaborating with the City of Grand Junction and the Grand Junction Economic Partnership (GJEP) about their vision for a riverfront business district in Las Colonias Park.

“We are hearing from more and more companies, like Bonsai Design, that they want to build where they can provide their employees with a stellar quality of life rooted in the outdoors,” said Kristi Pollard, GJEP Executive Director. “This is exactly the type of development that will give the Grand Valley a significant leg-up in the fierce competition to recruit new business, particularly in the growing outdoor recreation industry. We were thrilled to see a local business come up with such a grand vision for our community and to see our local partners come out and support the effort.”

The business and recreational park will be developed through a public-private partnership (PPP) between the City of Grand Junction, the Downtown Development Authority, Bonsai Design and other businesses. The PPP will work closely with state and federal agencies to create a park that is both economically viable and respectful of the riverfront.

The project will roll out in phases over an 18-month period, with multiple checkpoints and additional Council hearings to approve each milestone of the project. The first phase, which is expected to be completed before year-end, will include four pads within the business park, two of which will be occupied by Bonsai Design. Bonsai Design will also join the Grand Junction Economic Partnership in efforts to recruit additional tenants to the business park.