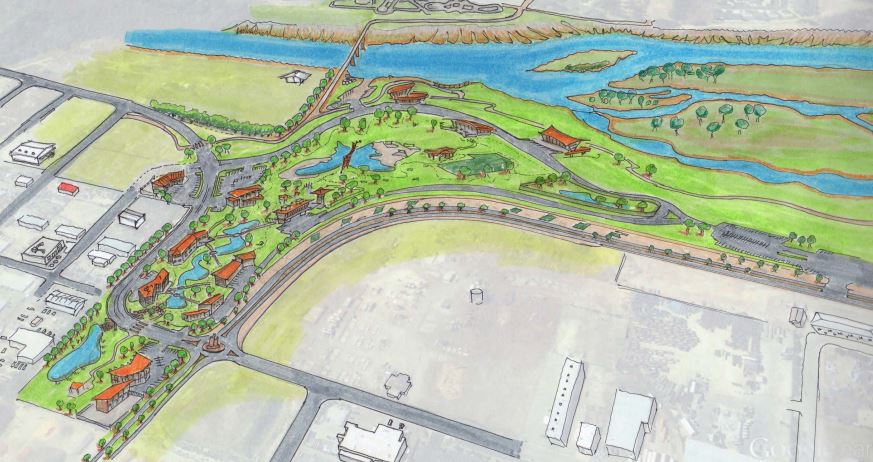 “The $30 million business park and recreational development –a concerted effort by multiple public and private partners – is just one step the city is making to brand Grand Junction as the number one destination for outdoor recreation businesses in the state. Dubbing itself as the “Outdoor Capital of Colorado” thanks to its diverse ecological assets and environments, its central location between the urban hubs of Salt Lake City and Denver, and its high caliber transit access for manufacturing and distribution, the region is on a mission to capitalize on the industry’s clear momentum.

‘We have our own airport. We’re a four-hour drive from Salt Lake City, four hours from Denver, and within a two-hour drive from literally hundreds of outdoor recreation destinations.’ said Steve Jozefczyk, business development manager for the Grand Junction Economic Partnership.

The ‘Riverfront at Las Colonias Park’ development was announced earlier this year but has just begun infrastructure construction on its 15-acre site, alongside the Colorado River in downtown Grand Junction. Created in response to an effort to keep industry power player Bonsai Design, and to grow the region’s economy, the site will host the headquarters for Bonsai and is actively seeking additional headquarters facilities. The unique element for this business park, when compared with hundreds across the State, will be the planned outdoor amenities incorporated directly adjacent to the companies who utilize them. From the creation of a lake to access for water sports brands, to active, usable climbing walls, volleyball courts, bike tracks, ropes courses, and campsites, the campus is designed to serve as more than an office park or manufacturing site, but also a unique testing ground for those products and services offered in the industry. Almost all amenities will also be open to the public, which aided in the project’s receiving of City and State incentives.”

VISIT RIVERFRONT AT LAS COLONIAS PARK TO LEARN MORE ABOUT THIS DEVELOPMENT AND SECURE YOUR SPOT IN THE OUTDOOR RECREATION CAPITAL OF COLORADO!