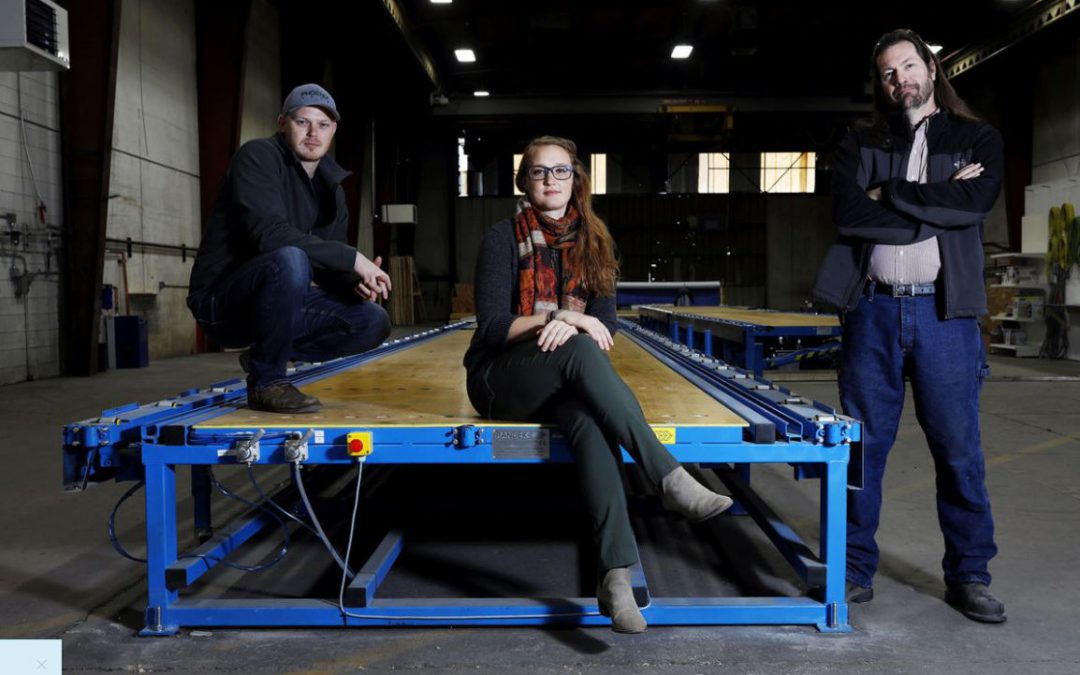 November 14, 2017 – Phoenix Haus, a Detroit manufacturer of passive homes, has moved its operations to Grand Junction – welcome! Company leadership credits support from GJEP and the Mesa County Workforce Center, as well as the opportunity to join the Rural Jump-Start tax credit program, as key catalysts for the move – however the lure of the Grand Valley great outdoors played an important role in attracting the company as well. Here’s more from The Daily Sentinel:


“When Bill and Kate McDonald were looking to move their business across the country, the brother and sister found that Grand Junction reminded them of the northern Michigan area where they used to vacation as kids.

It also helped that all of the company’s sales were coming from Colorado.

Phoenix Haus designs and produces carbon-free, open sourced housing templates for walls that save energy, provide better insulation and allow homes to be more efficient with solar energy. The finished product is known as a passive house, a building that needs very little energy for space heating or cooling. The product is installed by a home builder.

The idea for the business stems from Europe, where the model for extra, green insulation is popular in places such as Sweden and Germany and is also catching on in Japan. Some Colorado mountain home builders, new owners and architects showed interest in the product.

As for why it’s catching on in Colorado, Bill isn’t sure.

‘I think people are cool out here,’ he said. ‘They really appreciate the science.’

Kate’s only theory was that the housing market in the Midwest is a little different and a little behind economically compared to Colorado.

Phoenix Haus is currently leasing its warehouse, 2510 Foresight Circle, from Colorado Mesa University and Kate said she hopes to work with students from the school.

The process of moving out of Detroit started about two years ago, with other cities, such as Portland, Oregon, showing interest in the firm. In the end, the incentive package was more favorable in the Grand Valley…

The Grand Junction Economic Partnership will present to the state Office of Economic Development in December in hopes of adding Phoenix Haus and Pierce Corporation, which recently relocated its main warehouse to Grand Junction, to the program. To qualify, the company must maintain a minimum of five net new jobs with an annual average wage of $40,898. The McDonalds are the only employees moving with the business and the rest — between six and eight — will be hired locally.

Phoenix Haus has been working with the Mesa County Workforce Center and has participated in job fairs and the Job Training Through Development program. That initiative offsets the company’s salary costs by 75 percent for a few months while a new employee learns the ropes at the business and both parties can determine if it’s a good fit…

‘It’s great to see companies like that coming to Mesa County,’ [Steve Jozefczyk, GJEP] said. ‘It definitely helps bring some good paying jobs here, permanent jobs. It gives us an opportunity to show what our local, skilled workforce looks like.’

For Bill McDonald, he is excited to be in the Grand Valley and see his company grow with a local workforce.

‘There’s a lot of opportunity here,’ he said. ‘And I think there’s just an attitude and sense that people want to work and build.’

Phoenix Haus will be the 9th business to join the Jump-Start tax credit program in Mesa County, Colorado  – learn more about this tax holiday unique to rural Colorado communities.