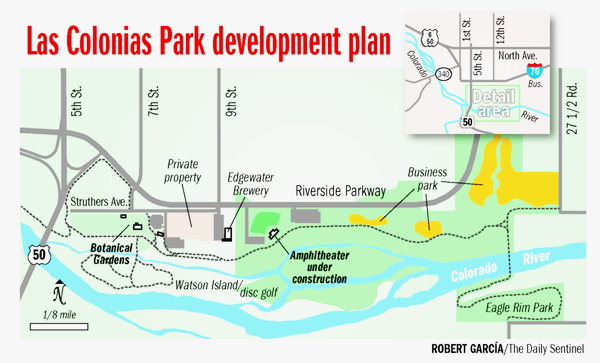 The city wants to allow 10 to 15 acres of the entire park to be used for outdoor manufacturing businesses and related operations.

It is poised to invest $10 million in the project to offer incentives for businesses to locate there, with the hopes it will spur an additional $20 million in economic development, Grand Junction City Manager Greg Caton said.

Councilors have signaled their OK for the city to enter into negotiations with Bonsai Design to offer an incentive package for the company to locate and serve as the anchor tenant.

Tentative plans include the idea for Bonsai to construct a building for about $2 million, with half the funds coming from the city. Bonsai would make lease payments to the city but also be freed of some taxes and fees.

In exchange, the city would realize the investment of a zip line across the Colorado River that would be used for public and private use, an asset with an estimated valued of $600,000, according to an analysis.

Bonsai is looking for a new home after selling its current space, in the Union Station train depot, to a developer last year.

The city will be leasing 10 other parcels or pads on the site to potential businesses.

Caton said the city wants to move forward aggressively on the project, putting in the pads by November to take advantage of warm summer months for construction.”