The Daily Sentinel Economic Focus March 2022: This Two-City Tale Has a Twist 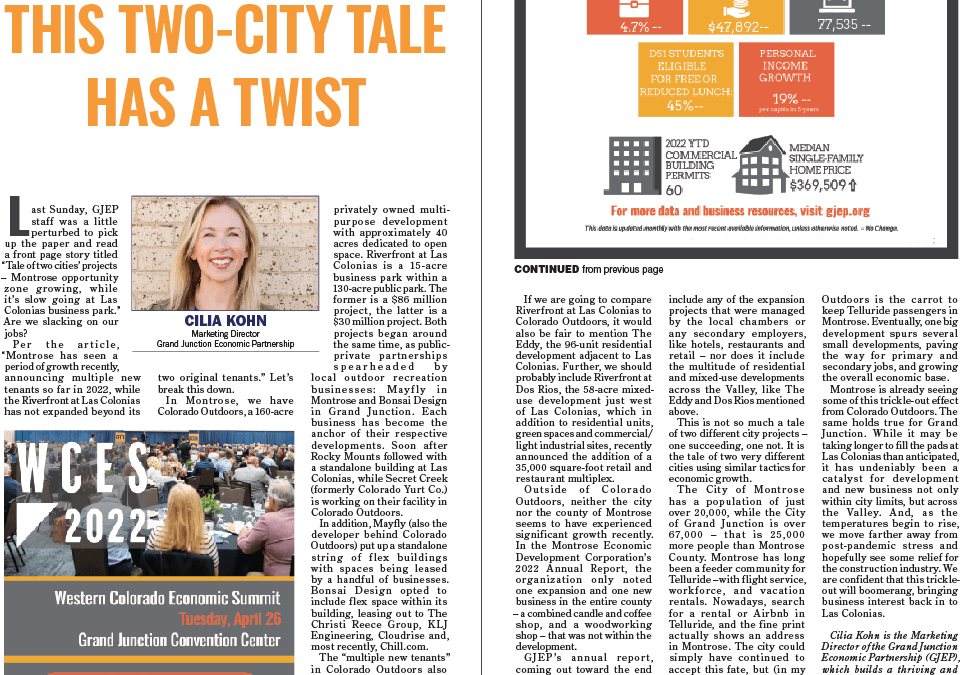 Originally published in The Daily Sentinel March 20, 2022
By Cilia Kohn

Last Sunday, GJEP staff was a little perturbed to pick up the paper and read a frontpage story titled “Tale of two cities’ projects – Montrose opportunity zone growing, while it’s slow going at Las Colonias business park.” Are we slacking on our jobs?

Per the article, “Montrose has seen a period of growth recently, announcing multiple new tenants so far in 2022, while the Riverfront at Las Colonias has not expanded beyond its two original tenants.” Let’s break this down.

In Montrose, we have Colorado Outdoors, a 160-acre privately owned multi-purpose development with approximately 40 acres dedicated to open space. Riverfront at Las Colonias is a 15-acre business park within a 130-acre public park. The former is a $86 million project, the latter is a $30 million project. Both projects began around the same time, as public-private partnerships spearheaded by local outdoor recreation businesses: Mayfly in Montrose and Bonsai Design in Grand Junction. Each business has become the anchor of their respective developments. Soon after Rocky Mounts followed with a standalone building at Las Colonias, while Secret Creek (formerly Colorado Yurt Co.) is working on their facility in Colorado Outdoors.

In addition, Mayfly (also the developer behind Colorado Outdoors) put up a standalone string of flex buildings with spaces being leased by a handful of businesses. Bonsai Design opted to include flex space within its building, leasing out to The Christi Reece Group, KLJ Engineering, Cloudrise and, most recently, Chill.com.

The “multiple new tenants” in Colorado Outdoors also include a hotel, a restaurant, a distillery, a fly-fishing shop and a rec center, as well as Basecamp, a 96-unit (to start) residential development. With all this, per the article, Colorado Outdoors still has another 40 acres to develop.

If we are going to compare Riverfront at Las Colonias to Colorado Outdoors, it would also be fair to mention The Eddy, the 96-unit residential development adjacent to Las Colonias. Further, we should probably include Riverfront at Dos Rios, the 58-acre mixed-use development just west of Las Colonias, which in addition to residential units, green spaces and commercial/light industrial sites, recently announced the addition of a 35,000 square-foot retail and restaurant multiplex.

Outside of Colorado Outdoors, neither the city nor the county of Montrose seems to have experienced significant growth recently. In the Montrose Economic Development Corporation’s 2022 Annual Report, the organization only noted one expansion and one new business in the entire county – a combined candle and coffeeshop, and a woodworking shop – that was not within the development.

GJEP’s annual report, coming out toward the end of next month, will show nine relocations/expansions in Mesa County. As pointed out in the article, none of these are in Riverfront at Las Colonias. Nonetheless, they are projected to add 35 new jobs with an average annual salary of $51,826 and a total economic impact over $9 million. This data does not include any of the expansion projects that were managed by the local chambers or any secondary employers, like hotels, restaurants and retail – nor does it include the multitude of residential and mixed-use developments across the Valley, like The Eddy and Dos Rios mentioned above.

The City of Montrose has a population of just over 20,000, while the City of Grand Junction is over 67,000 – that is 25,000 more people than Montrose County. Montrose has long been a feeder community for Telluride –with flight service, workforce, and vacation rentals. Nowadays, search for a rental or Airbnb in Telluride, and the fine print actually shows an address in Montrose. The city could simply have continued to accept this fate, but(in my opinion) they have made the smartest move possible: go all in on a development that highlights its greatest assets and appeals directly to a demographic that aimed higher (geographically), but is quickly becoming disenfranchised with over-priced and congested mountain towns.  Colorado Outdoors is the carrot to keep Telluride passengers in Montrose. Eventually, one big development spurs several small developments, paving the way for primary and secondary jobs, and growing the overall economic base.

Montrose is already seeing some of this trickle-out effect from Colorado Outdoors. The same holds true for Grand Junction. While it may be taking longer to fill the pads at Las Colonias than anticipated, it has undeniably been a catalyst for development and new business not only within city limits, but across the Valley. And, as the temperatures begin to rise, we move farther away from post-pandemic stress and hopefully see some relief for the construction industry. We are confident that this trickle-out will boomerang, bringing business interest back in to Las Colonias.