Back the Badge – Vote Yes on 1A 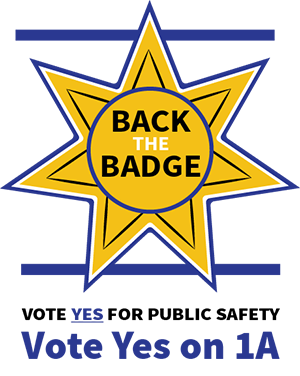 October 19, 2017 – In this past Sunday’s Economic Focus, The Daily Sentinel covered the “Back the Badge – vote yes on 1A” ballot initiative and why public safety is an economic development issue. Here’s the story:

“This November, voters will have an opportunity to help make Mesa County a safer and more appealing community at the polls through Ballot Initiative 1A, the public safety issue. Businesses, civic groups, community leaders and the Grand Junction Economic Partnership (GJEP) have all come out in support of the back-the-badge initiative, which will benefit the Mesa County Sheriff’s Office, the District Attorneys office and to a smaller degree, every other fire department, police department in Mesa County.

‘We’re trying to sell Mesa County as the best place to live, work and play, but the current crime rate makes it challenging,’ said Kristi Pollard, executive director of GJEP. ‘This is a basic need. People assume they will be safe.’

The population of Mesa County grew 20 percent over the decade between 2005 and 2015, and since 2011, 911 calls have increased 21 percent. Yet the number of sheriff’s deputies has decreased 13 percent since 2009 due to budget cuts.

‘We are at 2007 staffing levels, but the demand and pressure to deliver has not decreased,’ said Sheriff Matt Lewis.

Depending on what else is happening across Mesa County at that particular time of day and the number of calls deputies have already received, they may arrive within a few hours or may have to push it to the next day.

‘When you call 911, it is the most important thing going on in your life,’ Lewis said. ‘Citizens deserve better service.’

According to statistics provided by the Mesa County Sheriff’s Office, the response time to priority No. 1 calls in 2016 was only three minutes longer than it was in 2011. The response time for priority No. 6 calls, however, grew from 190 minutes to 288 minutes, so instead of waiting a little more than three hours for a deputy to respond if a property owner called to report a smashed storefront, that business owner had to wait almost five hours, on average.

From an economic development viewpoint, the increase in both violent crime and property crime sends a signal that the community is not the safest place to build a business.

,People often want to debate the role of government,’ Lewis said, ‘and this is undisputed: public safety and roads and infrastructure. We want to grow, and invite more businesses and more opportunity, but people aren’t going to respond if they don’t feel safe, if public safety is not well-funded and well-staffed.’

On the district attorney side, the number of felony cases has increased by 132 percent, while the funding per case has fallen 25 percent. The public defender’s office is funded by the state, and while the public defender’s office has grown as the crime rate increased, the district attorney’s office, which is funded by the county, has not.

‘As a statewide office, they can send resources out as they see the need,’ said Dan Rubinstein, district attorney for Mesa County. ‘We have not been able to increase the number of prosecuting attorneys.’

‘Victimization has gone way up. Our ability to do a good job and get right results continues to be hamstrung,’ Rubinstein said. ‘We don’t want to end up in a position where we are plea-bargaining and letting criminals back into society.’

As deputies get stretched thin and the caseload at the District Attorneys office grows larger, lesser crimes get pushed to the back burner, and the confidence of those who commit criminal activities increases, giving them the perception that they won’t get caught, which leads to a further increase in criminal activity.

‘In 2009, when the Sherriff’s Office had to lay off 25 deputies, immediately the perception of risk went away,’ Lewis said. ‘And crime got ahead of us.’

The upcoming public safety vote is critical to the continued health and growth in the Grand Valley, and the ballot was carefully written to ensure that money raised through the tax would be spent in a transparent way that prioritizes service to citizens.

For more information about the issue, visit https://backthebadgevoteyesforpublicsafety.org and read the other stories in the front section of today’s newspaper.”

Ballots drop in mailboxes this week, make your vote count!