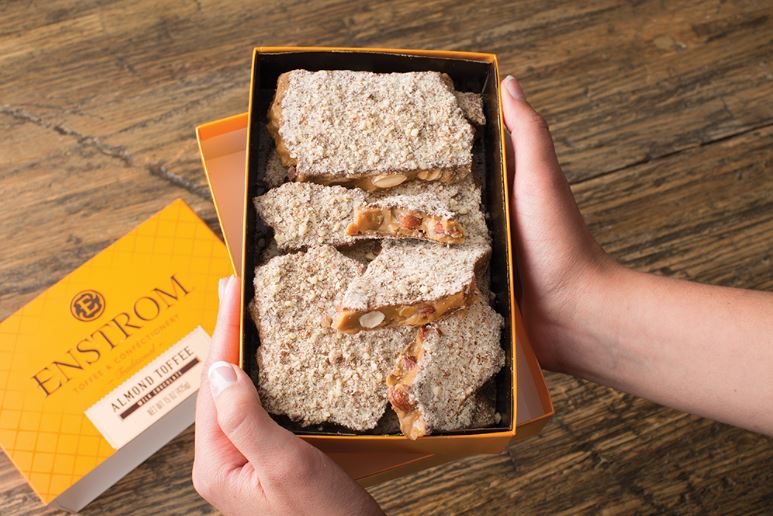 March 7, 2017 – There was a disappointing void of Grand Valley-based companies among this year’s “Made in Colorado” finalists in ColoradoBiz. However, we were thrilled to see this feature of one of our multi-generational businesses, Grand Junction-based Enstrom Candies:

“In the 1950s, Chester ‘Chet’ Enstrom was in the ice cream business, when an ingredient salesman ‘introduced him to a toffee inclusion, or a butter brickle inclusion,’ says Doug Simons, Enstrom’s third-generation president. ‘Chet came to realize it was a real nice confection and started playing with it.’

It began as a hobby, but he made Colorado candy history when he added almonds and launched Enstrom Candies in 1960. ‘He developed this recipe for what is Enstrom’s Almond Toffee today,’ says Simons. ‘He was pretty innovative.’

After Chet went to serve in the Colorado State Senate in 1966, his son, Emil, took over with his wife, Mary (the couple are Simons’ in-laws). The third generation of the family, Simons and his wife, Jamee, joined in 1979 and bought the company in 1993. Their sons, Doug Jr. and Jim, represent the fourth generation.

Tens of millions of pounds of almond toffee later, Chet’s inventive spirit continues to guide Enstrom Candies today. His recipe remains intact as the toffee continues as the core product. ‘If anything, it’s gotten a little better, because of our focus on high-quality ingredients and processes,’ says Simons. ‘Our annual production can be 3 million pounds a year.’

A big jump came in 2008, after the company invested in a new continuous cooking system. The company continues to make toffee the old-fashioned way, but the investment allowed for production of a half-ton of toffee an hour that’s “fully enrobed” in chocolate. That protection gives it an eight-month shelf life and allowed Enstrom to enter ‘the national candy aisle,’ says Simons.

The move paid off: Wholesale advances propelled the company to some ‘exorbitant growth’ as its traditional mail-order model plateaued in the age of the internet. The company now employs about 100 (a number that spikes to more than 200 for the winter holidays) and owns five retail locations in Colorado.”

Learn more about the food and beverage industry in Colorado’s Grand Valley here.